Here are the planetary positions of:


Introduction
Planets and other Solar System objects are not shown in the star chart of the planisphere, simply because they constantly move against the starry background of the Night Sky. Below you can read how you can find the locations of the planets, and possibly asteroids and comets) in your planisphere.
We start with an explanation of the coordinates we use to uniquely determine the positions of heavenly bodies in the sky: the celestial coordinates. The coordinates (ephemeris) used is from the Dutch Sterrengids ('Star Guide', see at the bottom), a guide with information about everything that will happen in a certain year.

Distances, however, are not important for making a star chart. Suppose all stars are at exactly the same distance. We would than get a huge sphere of stars with the Earth in the centre! We call this the celestial sphere (see ill. 1). To determine the position of a star, we need two coordinates, which corresponds to the system of latitude and longitude we use on Earth. Now suppose we would have an enormously bright light in the centre of the Earth, projecting all points and circles we have 'drawn' on Earth. We would than get a celestial equator, celestial poles and parallels and meridians. The astronomical equivalent of latitude is declination, that of longitude right ascension (RA).

Right ascension and declination
Declination is measured in degrees along the meridian, with the celestial equator being at 0° and the poles at 90°. It is shown on our planispheres by the red line running from north to south and through the hole and the zenith. The table shows three columns for the declinations: one column for the positive (north of the celestial equator) or negative declination, then one for the degrees and the last one is for the minutes (a degree is divided into 60 minutes!). Right ascension is measured in degrees or – as with the planispheres – in astronomical hours , with the vernal equinox (first point of Aries) as 0 hrs. You will find these astronomical hours along the outer ring of each planisphere. The tabla shows a coloumn for the hours and one for the minutes (with one decimal).

Visibility of the planets
The list of planetary positions also provides some other information, about the visibility of the planets. This is a concise explanation of the special situations, when certain angles and line-ups occur between the Earth, the Sun and the planet in question.
All planets orbit the Sun, with different speeds. With some regularity the Sun, the Earth and another planet are in a straight line (measured along the ecliptic plane, planets have a smaller or larger inclination). These are the situations we are talking about now.
The situation when a planet is in the direction of the Sun (thus close to the Sun in the sky) we call conjunction.
An inferior planet is a planet with its orbit inside that of the Earth: Mercury and Venus. They can be in the directionof the Sun in two ways: on our side of the Sun (an inferior conjunction) or on the other side of our star (a superior conjunction). Naturally the planet is farthest from the Earth in superior conjunctie, and closest in inferior conjunction. When the angle between the Sun and the planet (measured in the sky) is largest, we call it greatest elongation. We call Venus 'evening star' when it is at greatest eastern elongation, and 'morning star' when it is at greatest western elongation. Until a few centuries BCE the ancient Greeks that there were two planets there! They gave Venus two names and they did the same for Mercury. See the illustration below (it's in Dutch, but it will be clear what the text in English must be). 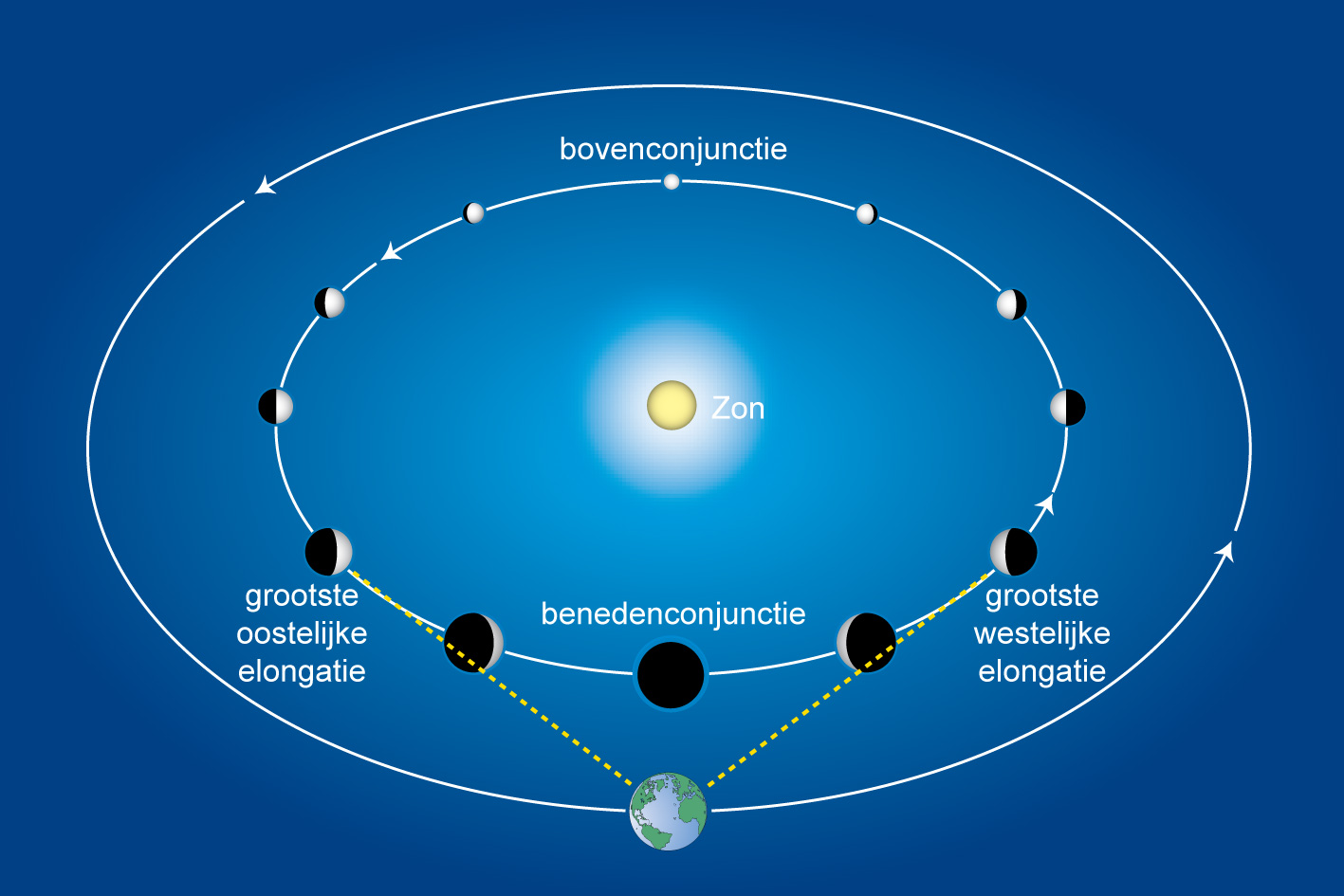 A superior planet (Mars, Jupiter, Saturn etc.) only has one type of conjunction, when they are precisely on the other side of the Sun. Naturally they are then farthest from the Earth (their distance from the Sun plus the distance from the Earth to the Sun). Besides they are invisible as they are outshone by our star. When a superior planet is on the other side, when the Sun, the Earth and the planet are exactly aligned,it is in opposition. It is the best situation to observe the planet as you can not only see it around midnight (the darkest period of the night), but it is also closest to us, and therefore somewhat larger and brighter.

The ephemeris in our table come from the Dutch 'Sterrengids' of this year, published by Stip Media: www.sterrengids.nl.