Also new (Dutch) Solar System scale model!
NEW: Cardboard kits of Earth-Moon model and Table Planetarium
At this moment (January 2015) we have three drie cardboard kits in our programme: the 'build-it-yourself' Star Wheel, the BIY Sundial (see here) and the Solar System scale model (your own Solar System path, in cards; see here). Besides we have a small quadrant and a ‘Star Clock’ (a small disc to determine the time by using the position of the Big Dipper - URSA MAJOR). The English versions haven't sold very well as, at this time, we don't have many selling points in English speaking countries.

Long development time...
All three cardboard kits were published in 2003 although I made the earliest version of the Star Wheel in 1985 and that of the Sudial in 1987. The Solar System scale model (scale 1:100 billion: the distance Sun - Neptune is 450 metres) was first made as a New Year's wish card, and in 2001 they were all part of a series of cardboard kits that I designed during the summer, having somehow found a lot of inspiration. Besides the two models described below, I also made a model of the celestial sphere, with celestial poles and equator, ecliptic, right ascension and declination. This one is very complicated and the Table Planetarium was also not yet perfect, This and the chronic lack of funds meant that only the trusted Star Wheel and Sundial, and the Solar System scale model were published in 2003.

In January 2013 two of these models, of which I had made development models in 2001, came into my own view again, when we used them as an extra in our stand on the Nederlandse Onderwijs Tentoonstelling (NOT, Dutch Education Fair) in 2013. They were the Earth-Moon model (to help you understand the motion and phases of the Moon, and eclipses) and a Table Planetarium (to help you understand the motions of the planets).
The response we received from the teachers was so overwhelming that I knew what to do, finally.

Budget...
In the summer of 2013 I picked up where I left in 2001, fortunately with some more insight and experience in designing. This also meant that within a short time I had a whole lot of new ideas, of things you could also do with the Table Planetarium!
The Earth-Moon model and the Table Planetarium entered the next stage at the end of 2013, family and friends building the models and testing them. The five sheets were printed with a large copying machine, the results being less suitable than the final versions that will be printed in offset. The toplayer of prints made with a copier can easily tear off the body of the paper, which is not what you want for a BIY products (that's why the models in the pictures are not perfect). But everyone could quite simply make the models, the criticism limited to... 'the Instructions are too extensive'. The story of my life…
Another problem was not fixed, yet: finding a budget. But now, a year latere, that problem was luckily solved, due to fairly good sales in 2014. 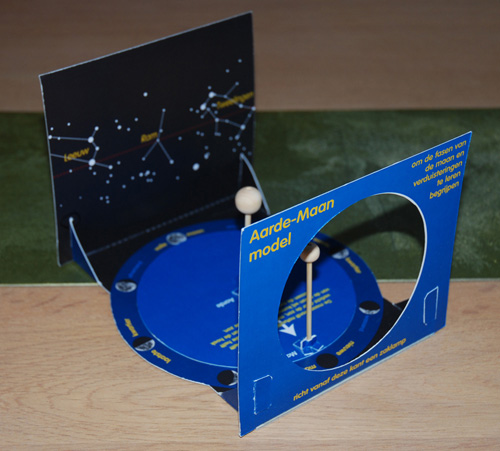 Understanding the celestial motions
What are the two new cardboard kits all about? They are two unique new products, designed based on my 36 years long experience in teaching astronomy, to let people better understand the motions of the Moon and planets. This makes them fine supplements to the Planisphere (that illustrates the daily and annual motions) and the Solar System scale model, that provides an insight into the distances in our cosmic neighbourhood.

The Earth-Moon model
The Earth-Moon model, or Tellurium, wasn't changed much compared to the 2001 design, simply because it was perfect as it was. The model is easy to make and use and is a great tool to help you understand the motion of the Moon, the phases of the Moon (New Moon, First Quarter, Full Moon and Last Quarter) as well as solar and lunar eclipses. 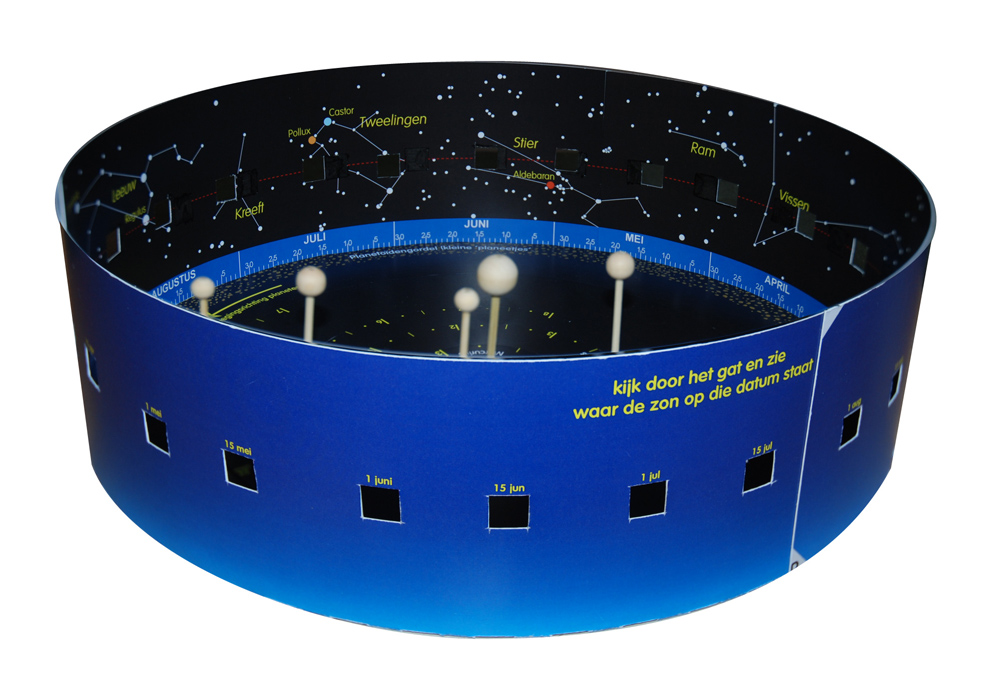 The Table Planetarium
The other cardboard kit, or DIY model, the Table Planetarium, is more complicated to design and build. But it is all the more exciting to use! It has enormous potential to explain the motions of the planets.
The bottom of this model contains discs for the Sun and the four inner planets (so up to Mars; Jupiter and Saturnus are not important for  showing the general planetary motions). This set-up already illustrates an important fact: that all planets orbit the Sun in the same direction but with different speeds!
It is also easy to illustrate the important positions in the orbit of the planets, as seen from the Earth: conjunctions, opposition and greatest elongations.
The model is surrounded by a high edge, giving it an dinner tray appearance. In that edge (let's call it the ecliptic edge) are holes, above which dates are put, for the 1st en 15th of each month. looking through these holes you can see the model of the Sun in the correct location along the line of constellations of the Zodiac! That gives us an important lesson about the annual motion of the Sun and the ecliptic.

Backwards motion of the planet
We already saw that planets move around the Sun at different speeds. That enables them to overtake one another. This in turn has the interesting effect that a planet, seen from Earth and against the background of the distant stars, temporarily moves in the wrong direction (retrograde movement) and even make loops! This can also be illustrated with the Table Planetarium, by moving each involved model planet by steps of one ‘month’, and noting the position of the planet on the inner side of the edge (with the ecliptic) each time. There are special arrows in the kit for that purpose. 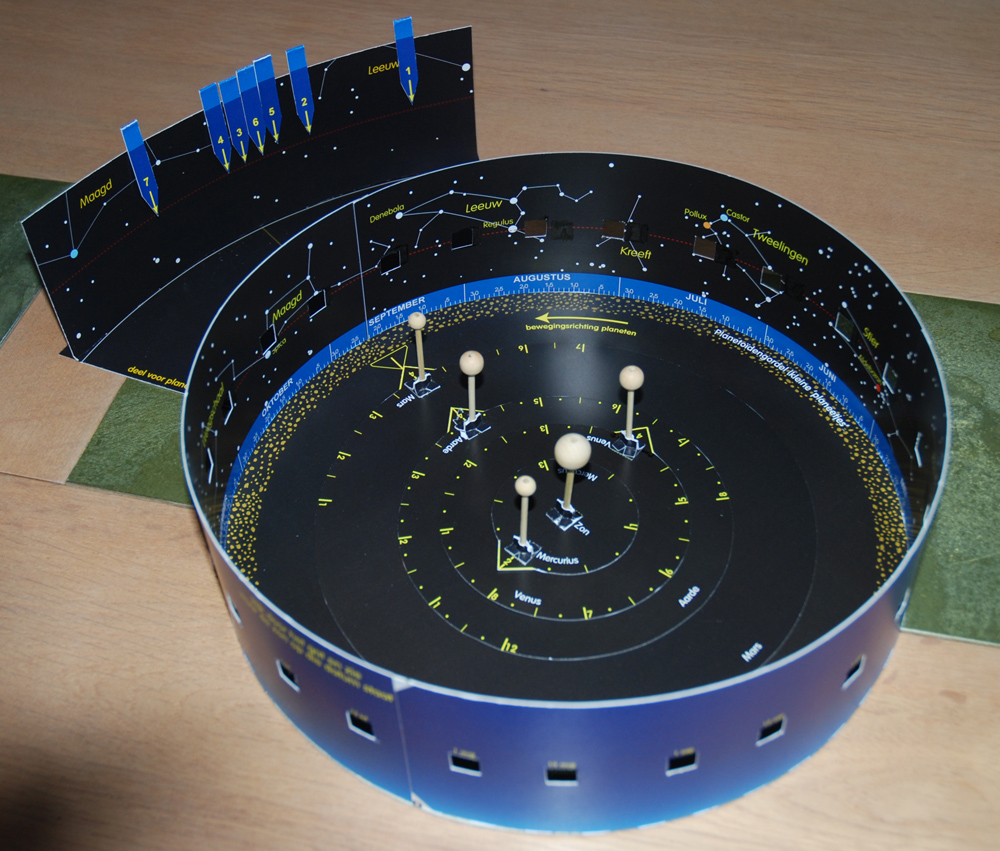 For the inner planets (the planets closer to the Sun than Earth: Mercury and Venus) that can be done by using that inner side of the edge, but the model for Mars is too close to the edge to use that (remember the stars are very distant). Making the Table Planetarium more than twice as large was not an option, so there is an extension part to place part of the ecliptic and Night Sky further away. That works great.
It is not possible with this system to illustrate the elliptic shapes of the orbits, and explain the perihelion and aphelion, the points in an orbit that are closest to, and furthest away the Sun, respectively. That's is why we added a new, third instrument (courtesy ‘astro-calculator’ Tom Peters, who gave me valuable advise). There is also a special ruler to measure the distances to the Sun for the four inner planets, in km and Astromical Units (AU; 1 AE is the distance Sun - Earth). You can also determine where Jupiter, Saturn and even more distant planets and other objects are with respect to the Table Planetarium's Sun model. 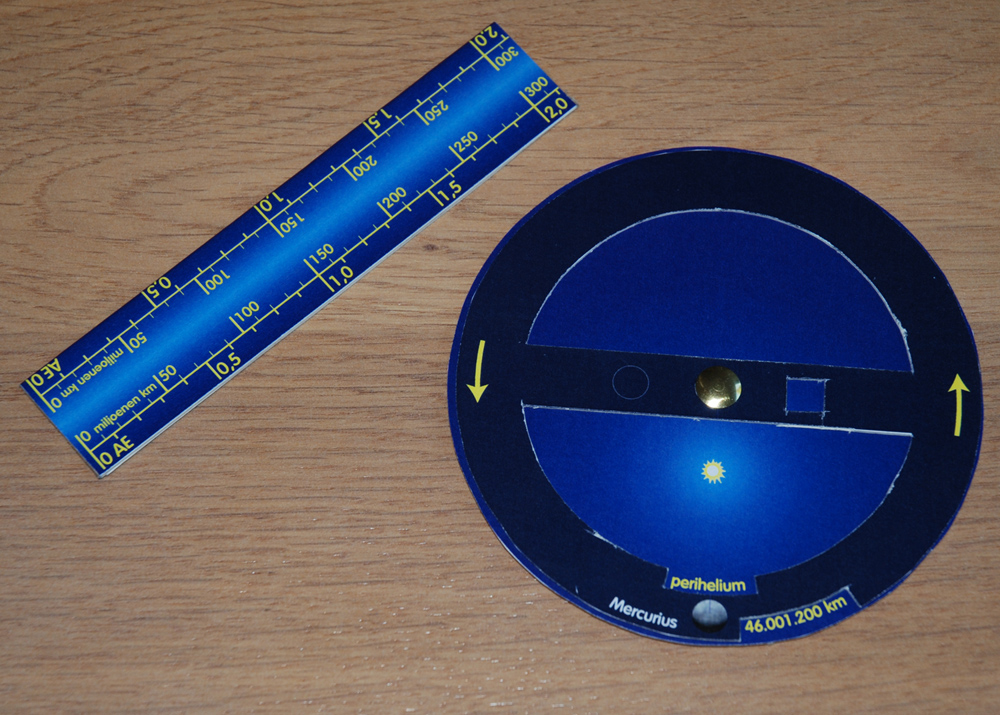 Left: two extra instruments form part of the new set of BIY astronomical models.
It is a perihelion/aphelion disc, to show that an object in an elliptical orbit changes
his distance to the Sun continually. It therefore has one point in its orbit that is
closest to the Sun (the perihelion) and one point that is furthest away (the
aphelion).
To the left of the disc is a special rules to determine where other objects would
be in the Table Planetarium.

What can you illustrate with the Table Planetarium?
The set is for all who are interested, but is, as with much of my work, especially well suited for youngsters and schools.
We hope to be able to produce versions in other languages, but we depend on partners to make this possible.

Instructions for use
The cardboard kit contains all the information to build the models, but for its use there will be a special brochure (in Dutch, for now) with text and illustrations for its use. This will be available in PDF format and will be downloadable, for free, through our website. his has major advantages:
There will English translations of both the building instructions and a guide to work with the instruments, that will be downloadable in PDF format. Hoepfulle they will become available from English language publishers on day.