A great tool to educate your visitors and students

The Super Planisphere is out 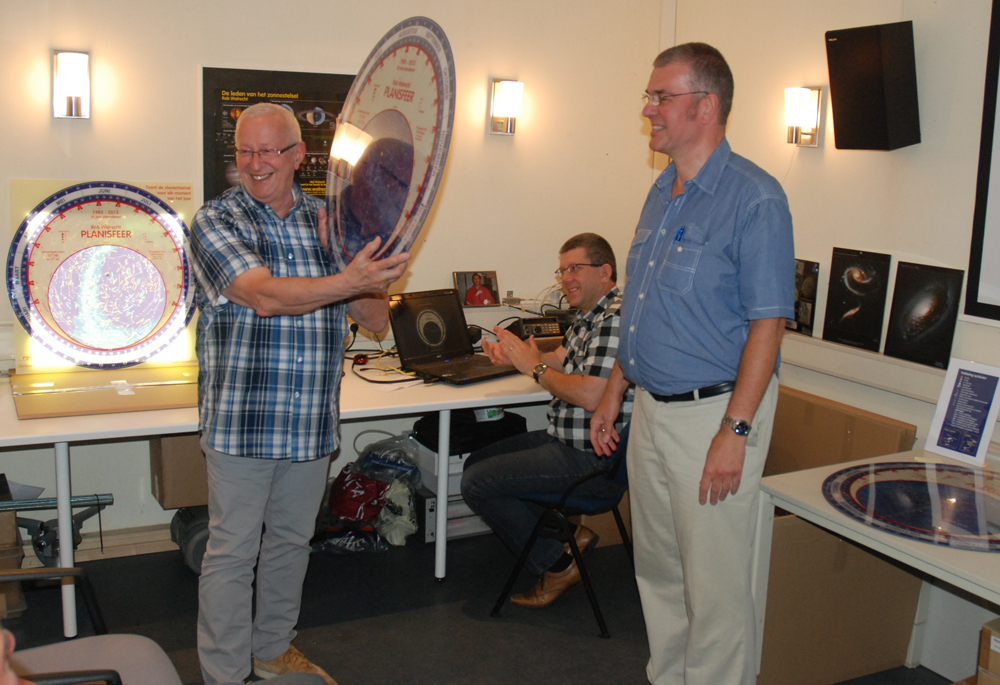 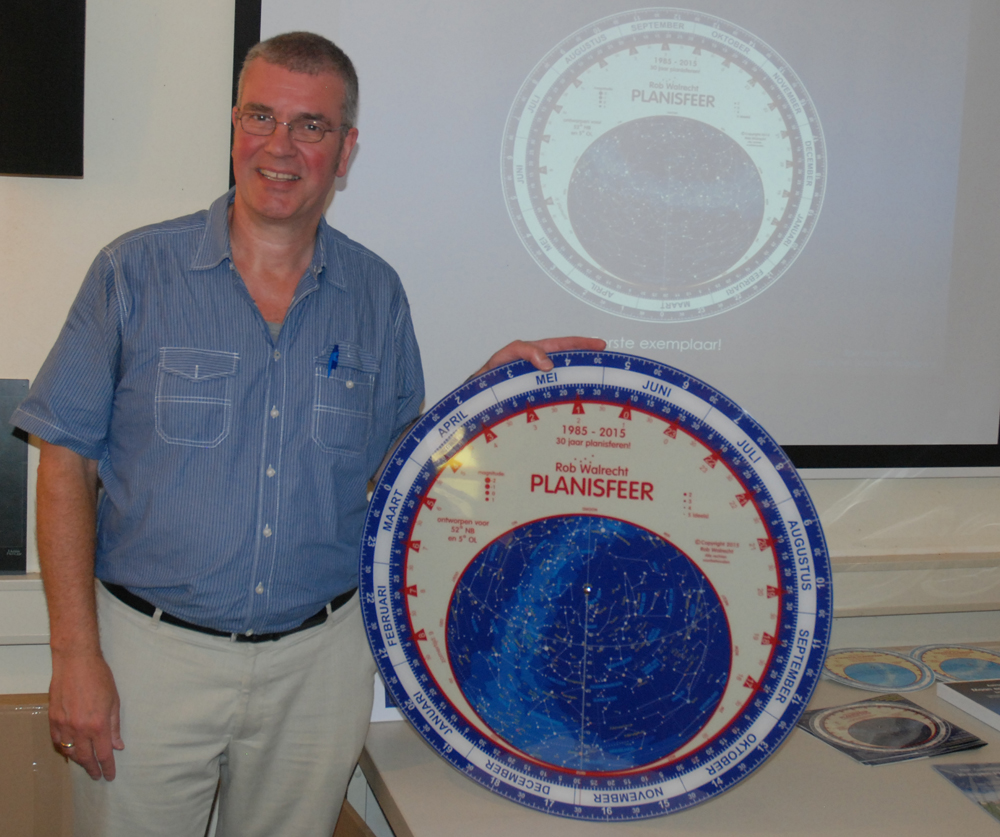 Presentation of the 70 cm (28 in) Planisphere

Imagine hanging on the wall of your living room: a huge, round Planisphere that shows you exactly what the night sky will look like when you go outside. And the weather is clear of course... You can even use a light box to make a wonderful display!

On 11 June 2016 Rob Walrecht presented his Super Planisphere, of which only one hundred are produced.

The huge planisphere was published as part of the 30th anniversary of our company, Rob Walrecht productions, in 2015. It's thus a bit late, but better late than never. Last year we were too busy with the realisation of our four other new products, to be able to solve so many technical challenges.

That means 30 years of designing, producing and publication of planispheres. And then I forget the first, which in made in 1982, when I worked in the then Zeiss Planetarium Amsterdam. Now I have the largest planisphere programme in the world, with over 20 versions, in 14 languages. The nine English planisphere together cover the entire populated world!

The idea for a Super Planisphere is quite old, have appeared before every lustrum since the start of this century. But now it is really out! It's a dream come true. It's a wonderful instrument to work with, particularly when we get older and can't read the small numbers and names on the normal planispheres any more... But it also shows more of the night sky, more objects and other features, more colour, and more 'emptiness' as not all text parts were enlarged the same.

When the turn of the century was nearing I was still drawing my planisphere designs by hand, with rubbing off type letters for the text parts. However, the paper on which the design were drawn was not steady,  as paper never is. My circles had become ellipses and the intended accuracy, enabling, for instance, to use of declination and right ascension, became a farce... Graphical people had already advised the use of Adobe Illustrator for years, but I needed someone to tell me the inns and outs of it so I could start quickly to make new - digital - designs.
I found the perfect person: fellow astrocartographer Wil Tirion. He is famous for his work, star atlasses and star charts and illustrations for books and magazines all over the world. I already knew him since the 80's and he was very willing to introduce me to Illustrator, one day in early 2000, at his home.
Since then I created my present master designs, on efor the northern and one for the southern hemisphere, both with all latitudes, from 90° down to -90°. I also had to produce all upperdiscs, back sides etcetera. It all took me at least a year of hard, but wonderful work.
All this time I came upon problems and questions, and Wil Tirion never let me down. Presenting him with the first official copy of the Super Planisphere was the perfect chance to show my appreciation to him in style.

It is an instrument that can be used by (amateur) observatories, astronomy clubs, museums, schools etc., for educating their visitors en students. Only 100 copies will be made, but we have plans to do English Super Planispheres for at least 40° and 50° north through crowndfunding.
The Super Planisphere is 70 cm in diameter. It is plotted on 3 mm thick transparent PVC. The upper disc is similar to the upper discs of our normal planispheres, just much larger and thicker.

The Super Planisphere can be used at home or in the field, but we have also produced a small number of 'front plates', a rectangular 'upper disc' that can replace the upper disc. With this plate standing still and the star chart rotating behind, you can make a fine display for educational purposes. You'll need some light box of course.

In the way of the design such a huge planisphere offers more possiblities then the smaller planispheres. In particular, as this planisphere is printed in full colour, I can use more colours. The text parts were not all enlarged in the same way as the names of constellations and stars, making the design a bit less crowded - and allowing for more special objects at the same time!
The 'Verklaring symbolen' ('Explanation of Symbols') can be provided in English as it is delivered as a PDF.

The Super Planisphere  costs € 249,00, excluding shipping. Our website doesn't for the correct shipping cost here so please send an e-mail to info@walrecht.nl before you order, to determine the cost of shipment.


Below some details of the huge planisphere. 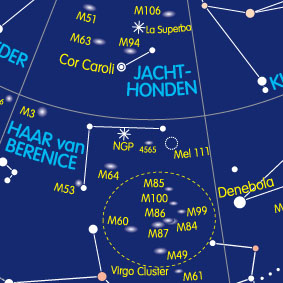 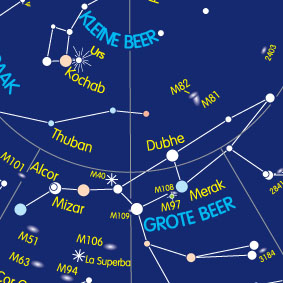 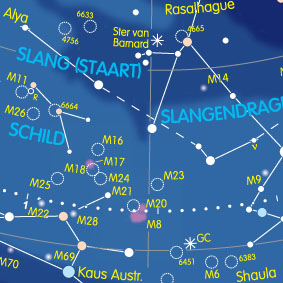 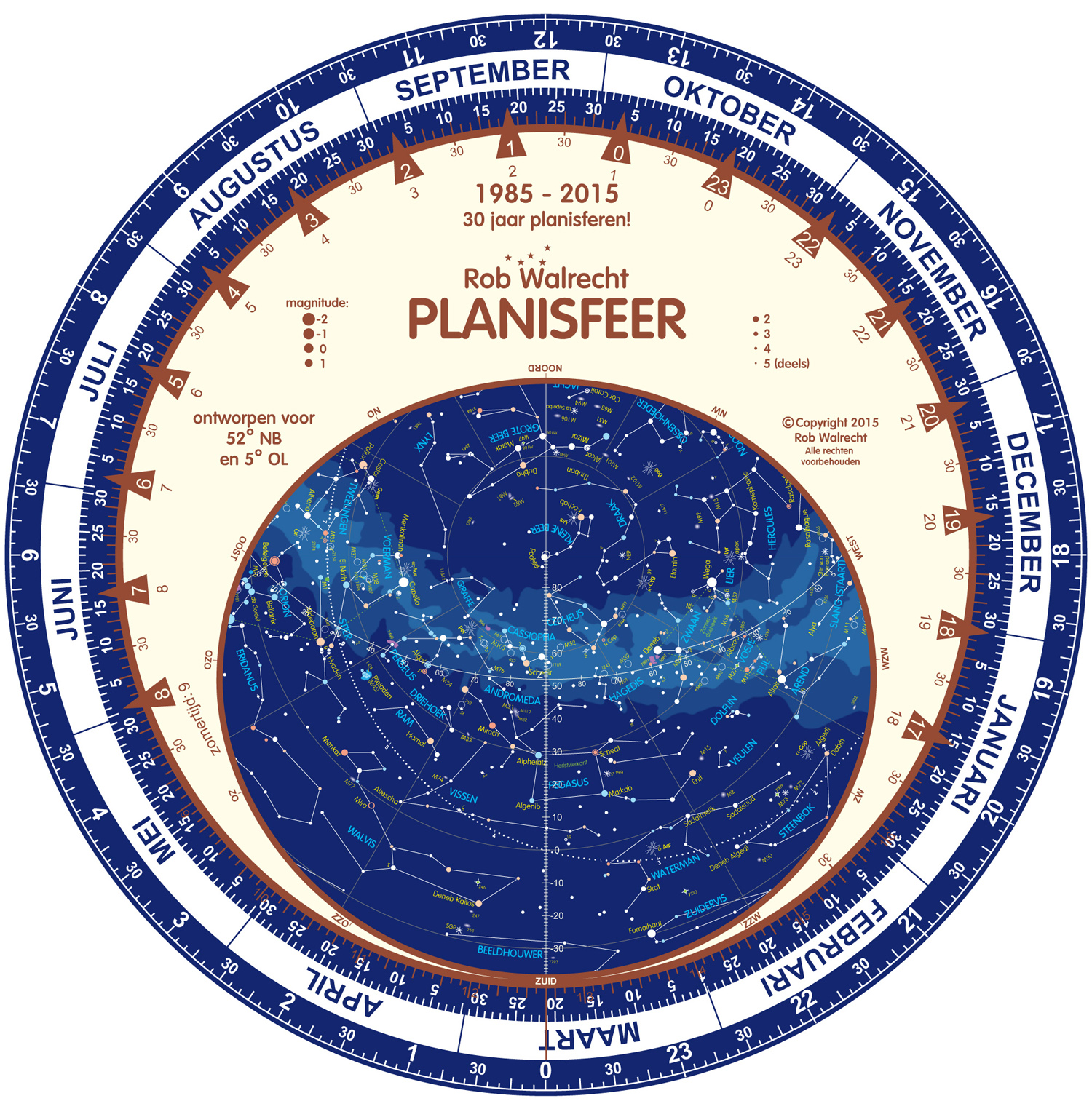